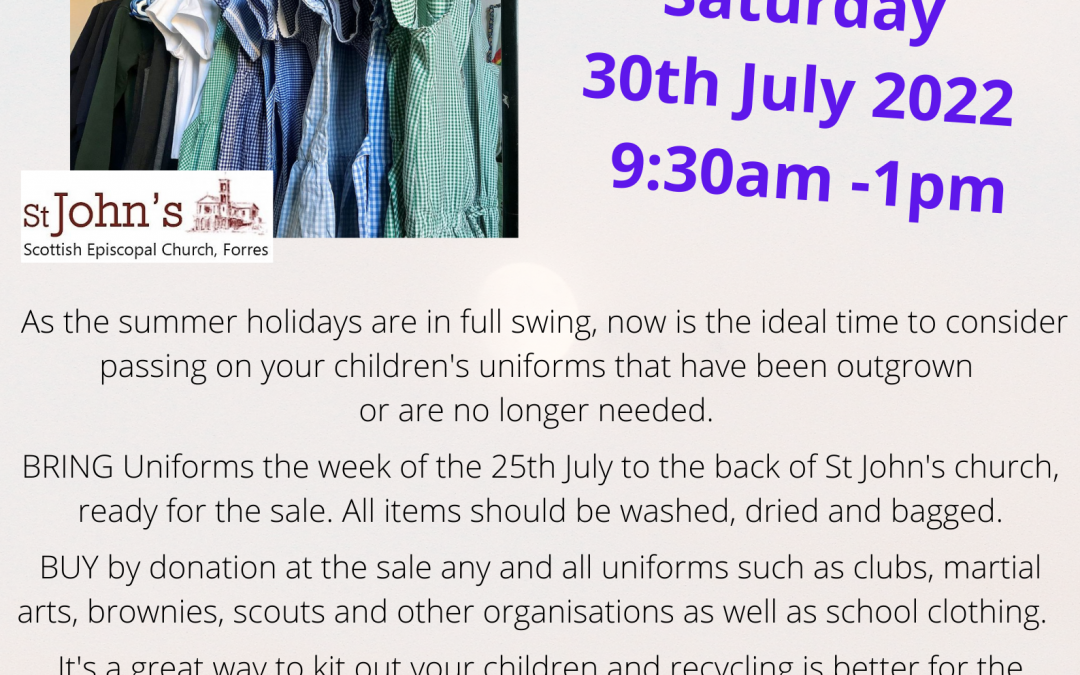 The team from St Johns are hosting another pay by donation based uniform sale a few weeks before the start of term just in case anyone was thinking of making some of their child’s school uniform a pre-loved item.  The sale will include all uniforms such as Scouts, Cubs, Brownies, Rainbows, Martial Arts, etc. as well as school uniforms. If everyone had at least one item of recycled uniform that could bring costs down as well as helping the environment.

The Social Committee at St John’s have been discussing for some time the rise in the cost of living plunging families into poverty through no fault of their own, as well as the response to climate change.  The idea to hold a pre-loved uniform sale at St Johns last April worked very well and had support from Moray School Bank and Turning Point Church on the day.  Covid has caused many people to lose businesses and their jobs as well as there been high numbers of child poverty pre-pandemic.  The idea fitted very well with what support Moray School Bank (MSB) offer and so it was decided that the donations from the sale would be given to MSB to go directly to supporting the children and young people in Moray.

Moray School Bank attended sessions at Keith Grammar School before the last term ended to speak to the pupils about what the charity was all about.  KGS already have a rail of items where pupils can just take and use where they want.  Vicky Flood from Moray School Bank said, “Schools including those in the Forres area, such as Logie Primary, and others across Moray are also discussing re-using items as part of their curriculum and many also have rails already for items to take, be it for free or for a donation.  With the cost of living increasing, this is a way everyone can make savings.  The environment is very important too, we are in the middle of a climate emergency so the more we are re-using, the better for everyone.  This sale is about all uniforms as well, not just school uniform.  The more people bring to pass on and the more people come to the sale, the more everyone can benefit.”

“40 + years ago, we had bring and buy, and jumble sales.  If each child used at least 1 item of recycled uniform at least once over the course of the school year, then that should go some way to help the environment and the family purse.   Moray School Bank take in a lot of good quality second hand uniform and use that during the school year.  If it’s in good condition, then it should be used again.”

It takes a community, ‘a village’, as it were to come together and solve problems and issues collectively.  Moray School Bank has recently received funding from the National Lottery Community Fund through their Improving Lives Grant to work with communities across Moray over a 3-year period.  The project is due to start in the coming months.

There is another sale planned for October.  The idea is for St John’s to have three sales a year at prominent times to support anyone who wants to upcycle and re-use.  It is hoped this can be replicated across Moray.

For items that are to be dropped off, please do so by leaving them at the back of St Johns Church.   You can message or email through Facebook or through their website.  You can also contact Moray School Bank on 01340 212101 or email Vicky Flood at vicky@morayschoolbank.org.